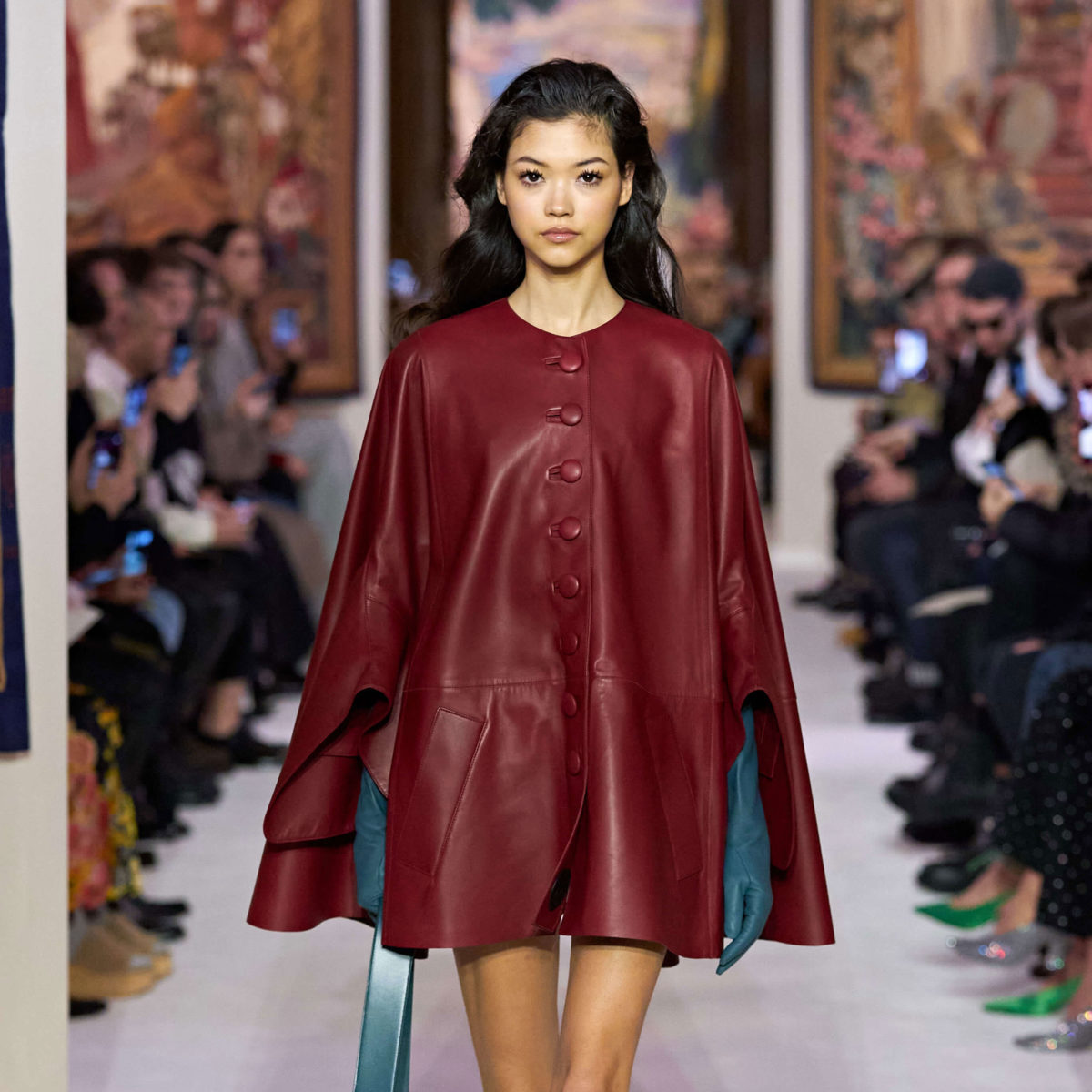 Crossing lines of dialogue – other voices, different personalities, points of view. The Lanvin Fall/Winter 2020 collection is a collection of discussions between past and present, patrimony and modernity, all using the language of the Maison to communicate to the now.

Conversations are found between manifest individuals. First, foremost, there is the conversation between Lanvin creative director Bruno Sialelli and the founder Jeanne Lanvin, traversing time and connecting the contemporary with the historical. His investigation of her design vocabulary discovers a fresh grammar and syntax. But in turn, that conversation inevitably reflects others – namely Jeanne Lanvin’s visionary collaborations, uniquely based in dialogue with different creative disciplines – she not only designed clothes for women but, in collaboration with a family of creatives, devised childrenswear and menswear, interiors, cosmetics and parfum. All are referenced here, those individual tête-à-têtes feeding a more general discussion, each speaking of Lanvin in a different voice.

Lanvin’s 1949 collaboration with the French poet and author Louise de Vilmorin on the book L’Opéra de l’Odorat – in itself a collaboration, prefaced by Colette and illustrated by Guillaume Gillet with watercolours and expressive calligrams, is a source of graphicism. Words wind their way into illustrative lines of print, expressive watercolours are printed across feathers and silks. The perfume and beauty lines of Lanvin are translated into bijoux de fantaisie and buttons furrowed like the flaçon of Lanvin’s signature 1927 fragrance, Arpège; Lanvin’s cosmetics suggest a whispered color palette of powder blue and blush-pink, bordeaux, rouge feu and rose-midi. Furthermore, their forms are used for accessories – minaudière handbags are formed from overscale lipstick and rouge compacts, like surreal objets d’art. Lanvin’s conversation with designer Armand Albert Rateau resulted in the extraordinary interior of her home on rue Barbet de Jouy – a zoomorphic wonderland of animaux transmogrified into furniture, here translated again into jewellery and accessories. Menswear – originally launched in 1926 – here underscores the women’s silhouettes, each borrowing from the other.

Lanvin lived beyond Jeanne. As a fragrance diffuses a room after the wearer has left, these clothes bear traces, evoke memories and emotions. They are redolent. Garments themselves reference not only Jeanne Lanvin’s signature sinuous lines of the 1920s 1930s, her robes de style and graphic Modernist embroideries, executed like jewels, but also the work of her successors, who converse with her as inspiration. The curvilinear shoulders and structured brevity of tailoring recall mid-century haute couture, balanced on heels formed into a graphic, abstract ‘J’ for Jeanne, a Brancusi incline.

A wider conversation comes from Lanvin’s perception – as an innate, distinctly French brands, the oldest couture house in Paris. References are draw generally from this abstract notion of Frenchness: the bourgeoisie gesture of a matching parure of jewels, the gesture of a gloved wrist matched to handbag matched to shoes. From the art of Henri Toulouse Lautrec and Pierre-Auguste Renoir, executed when Maison Lanvin was founded in 1889, come ruffled rond de jambe skirts, a froufrou femininity. Playfully, a Parisian pâtisseries box can become a handbag. Exploding those periods, the show décor expresses a notion of contradictory domestic grandeur – a maison meets a maison de couture. Created in the Manufacture des Gobelins, using archival tapestries drawn from several centuries to create an interior reminiscent of both then and now, it is another conversation piece.

In all, a manifesto of Lanvin. Past, present, always.